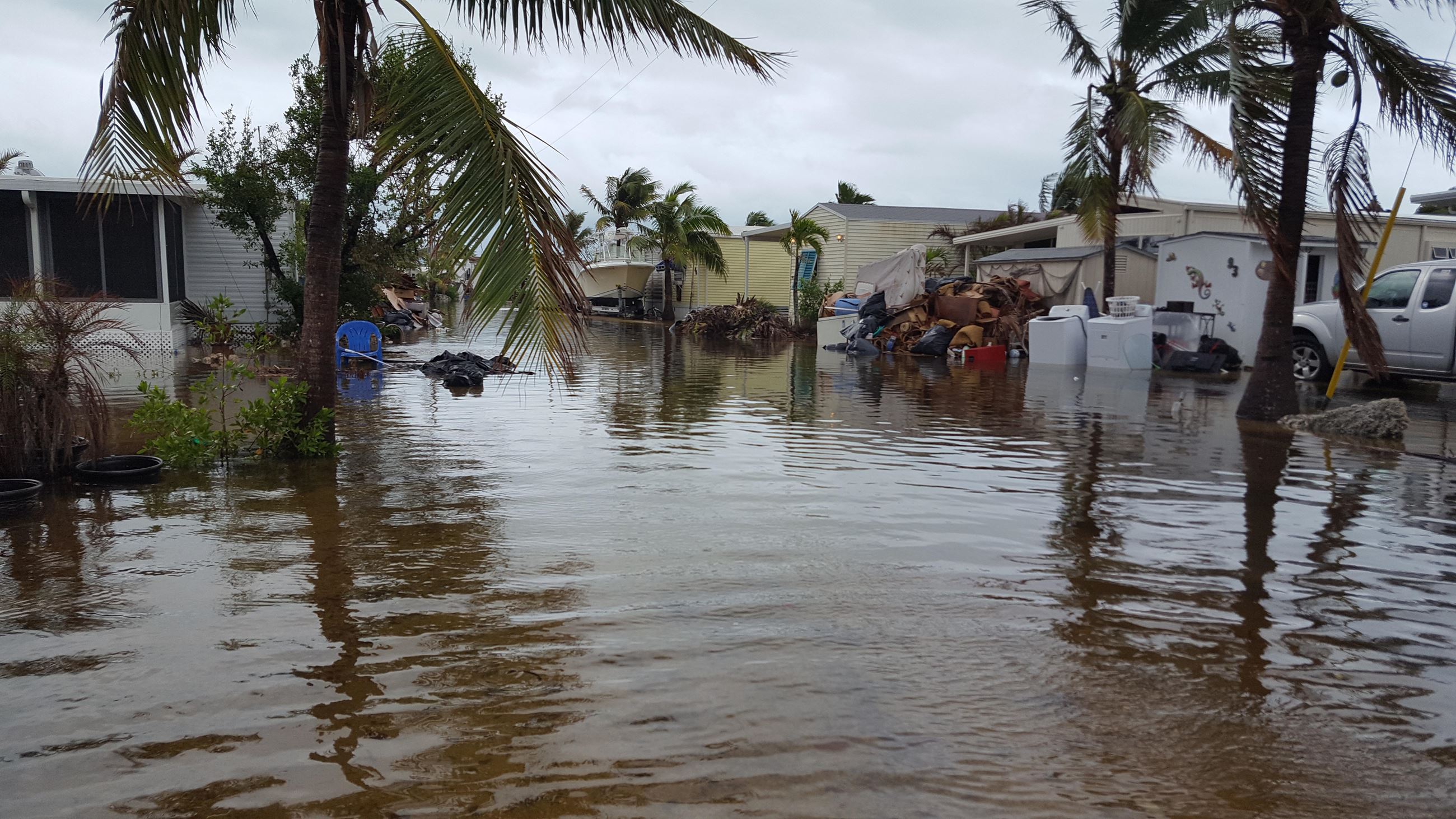 Monroe County is ground zero for experiencing the impacts of global climate change and sea-level rise. Along the chain of islands that is barely above the sea, many streets experience flooding times throughout the year especially from extreme fall and spring high tides, commonly referred to as king tides.

In 2016, the County set priorities, a work plan, and implementation strategies, which can be found at its Green Keys website. The Green Keys Sustainability Action Plan identifies the County’s vulnerabilities to sea-level rise and climate change and provides a comprehensive 5-year roadmap on how best to proactively deal with these issues that likely will worsen in the future.

Habitat for wildlife that once was high and dry continues to have seawater encroach on the lands. Rising seas have begun to affect some roads and other County infrastructure, as well as some homes and businesses – and will continue to do so into the future.

The Board of County Commissioners approved hiring a sustainability director, now known as the Chief Resilience Officer, in 2012. The director’s job is to address sustainability and climate change issues, manage a comprehensive canal restoration project to improve the County’s water quality, and to monitor the solid waste and recycling program to help the Florida Keys become more green and sustainable.

The Monroe County Board of County Commissioners adopted the updated Unified Regional Sea Level Rise Projections of the Southeast Florida Regional Climate Change Compact and directed staff to utilize the updated projections as the basis for future sea-level rise adaptation planning activities. This action provides the Board with sea-level rise projections and a support document to guide risk assessments and sea-level rise adaptation planning county-wide and in coordination with the region of southeast Florida. The County is using these revised projections in its Roads Adaptation Study, which is currently underway.

This is the third technical Regionally Unified Sea Level Rise Projection document that has been produced that is updated every four to five years by the Climate Compact technical team. The team consists of members from the academic community, federal agencies, local government staff, and includes the most up-to-date, peer-reviewed literature, and climate modeling data.

Estimates of sea-level rise are provided from the baseline year of 2000, and the planning horizon has been extended to 2120, in response to climate scenarios by federal agencies extending beyond the year 2100 and the need for planning for infrastructure with design lives greater than 50 years. 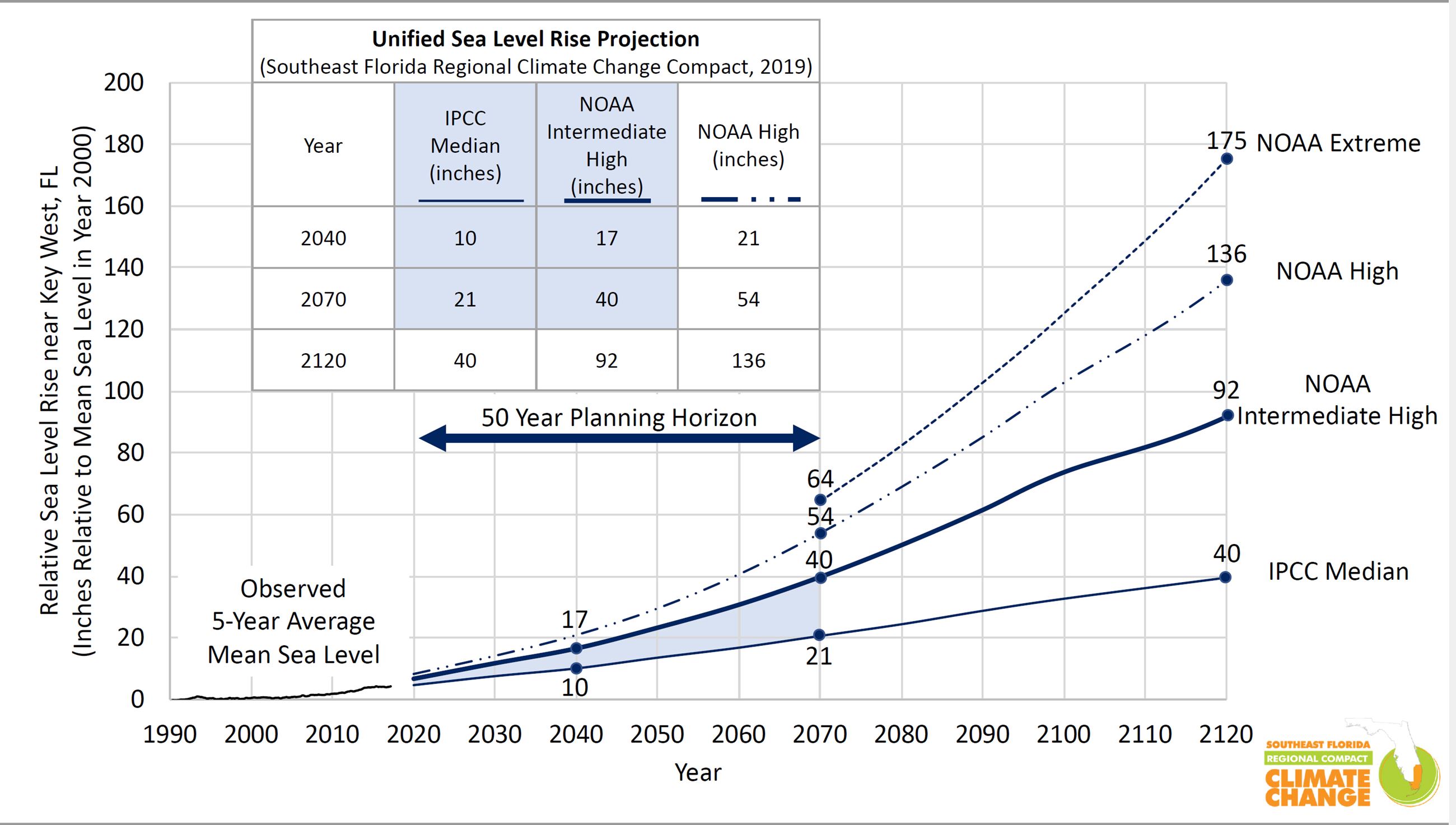 Sea level measured at the Key West gauge has risen approximately 3.9 inches from 2000 to 2017. According to the graph, the mean sea level rise is projected to be the following:

The projection considers regional effects, such as thermal expansion from the warming of the Florida Current, that produce differences in Southeast Florida’s rate of sea-level rise compared to other areas in global projections. The NOAA extreme curve is displayed on the Unified Regional Sea Level Rise Projection for informational purposes but is not recommended for design.

The climate is changing, manifesting in significant impacts for the Southeast Florida region, including increasing average temperatures, more intense storm events, and rising sea levels. The Southeast Florida Regional Climate Change Compact is the result of Miami-Dade, Monroe, Palm Beach, and Broward counties recognizing the need to create a regionally unified program to ensure consistency in planning and policy in the four-county area.

In 2014, Monroe County embarked on a Canal Restoration Program after a study showed that 311 of the 502 canals throughout the island chain did not meet the State’s minimum water quality criteria, and are a source of nutrients and other contaminants to nearshore waters.

The County has funded $7 million for 8 demonstration projects that used different methods for canal restoration. The purpose was to verify the applicability, feasibility, effectiveness, and costs of the different methods. State and federal grants have contributed more than $1 million to this program.

Results from a U.S. Environmental Protection Agency grant, which provided funding to address data gaps and changes to the State’s DEP dissolved oxygen methodology and criteria in the canal masterplan, showed a reduction in the number of “poor” classified canals throughout the Keys. Based on this new information, the County is re-ranking and prioritizing canals for potential restoration projects.

The Monroe County Board of County Commissioners directed staff to sign the required letter of support and financial certification and to accept the feasibility study developed by the U.S. Army Corps of Engineers (USACE) for reducing coastal storm risk vulnerability for the Florida Keys. The plan is subject to further congressional authorization and funding availability.

The plan was developed under a 3-year Coastal Storm Risk Management Feasibility Study with the USACE and includes nonstructural and structural measures that will reduce the risk to the Florida Keys from coastal storms, including storm surge, sea level rise, and other changing conditions which pose potential coastal storm risks. In late April 2021, the final feasibility report will be released for public review and the 3-year study will be completed in September 2021, at which time a Chief of Engineer’s Report will be signed by the USACE so the recommended plan can be potentially authorized into law by Congress.

The first portion of the proposed plan to move forward includes six revetment areas along U.S. 1 that have been identified as vulnerable to erosion and wave energy. In addition, voluntary residential elevations and floodproofing of commercial and critical infrastructure vulnerable to storm surge damage throughout the Florida Keys are included. USACE removed all acquisitions from the plan after additional analysis determined it was less cost-effective compared to the elevation of homes.

The project total is estimated at $2.6 billion, to be split 65 percent federal ($1.7 billion) and 35 percent non-federal ($893 million). Non-federal funds can come from state, county, municipalities, and other non-federal entities.